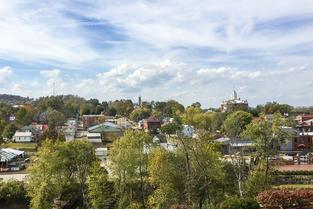 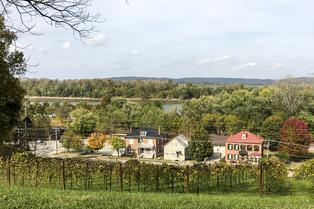 Hermann is a true gem in the state of Missouri. Located centrally in the state, Hermann is only an hour from Saint Louis, Jefferson City, and Columbia. This quaint village along the Missouri River was founded in 1837 by German settlers who found the steep, rugged terrain reminiscent of the Rhine Valley region in Germany. Taking advantage of the rugged landscape, the settlers cultivated vineyards along the hillside and began producing wine. By the turn of the nineteenth century, Stone Hill Winery in Hermann had become America’s second largest winery and a winner of gold medals at World’s Fair competitions internationally. Prohibition put a temporary hold on wine production for nearly 50 years but Hermann quickly rebounded and began reclaiming its reputation as a great American wine region.

Currently, Hermann produces over one third of Missouri’s wine, with seven wineries in and around the area. Many offer winery tours and wine tastings, and are a popular attraction during the town's annual festivals. Maifest and Oktoberfest being the biggest, these city-wide festivals celebrate the town's historic German heritage and feature food, dancing, music, wine, and beer gardens.